Otherwise known as "In which I cooked the wrong thing".

I had a nice pork chop recipe to cook tonight, bought all the ingredients, the whole shabang. It was supposed to be baked pork chops with a nice mushroom gravy. The mushrooms are in the fridge mocking me.
To go along with this feast I planned on making a potato side that I haven't made in a while. It's the most unhealthiest side I can think of, I haven't made it in almost 2 years.
I suppose I had French Fried onions on the brain, because when I went to my email to get the recipe for the pork chops, I typed in "Crunchy Baked Pork Chops", not at all "Pork Chops with Mushroom Gravy Sauce" and then preceded to make the dish. After I had them in the oven, I THEN realized I am retarded and shouted "CRAP I am cooking the wrong thing!!" 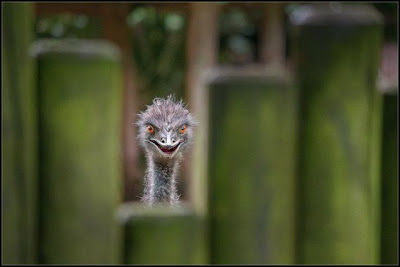 Take 1/2 inch thick boneless pork chops season them the way you like. I love Lawry's seasoning, garlic powder, white pepper, and a shake of garlic salt.

Get two eggs and Panko bread crumbs. I also added a shake or two of Loeb's Onion Crunch. These things are amazing. They make your breath rank, but I still add them to the majority of all my food. I am lazy and don't like to cut up onions. It's not like I have family or friends that come over. Probably because of things like THIS.
I added the above mentioned seasonings to the bread crumb mixture, and mixed them all in a lime green bowl. The eggs had to be cracked into an old butter tub. Don't judge. Buy me bowls if you don't like it.

Coat the chops in egg, then Panko mixture. Place on greased pan.

I suppose you can use actual French Fried Onions. Be that way. 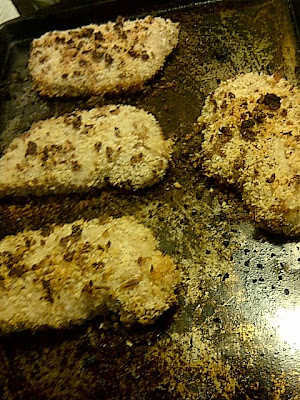 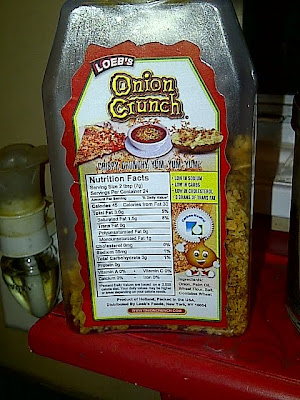 The first time I made this I actually boiled potatoes and mashed them myself. Yeah, that only happened once.

Make instant mashed potatoes. One package or two, depending on how gluttonous you feel.
After they're ready, add half a cup of sour cream, garlic powder, and 1/4 cup of milk into the potatoes. If you use both packets of potatoes, you will want to use more sour cream/milk, but don't double it. Trust me.

Spread half of the potato mixture in a baking dish. Add French Fried onions (I snuck some of the Loeb's Onion Crunch in here as well) and cheese of your choice. I normally use Colby Jack, which was the majority of cheese today, but I also use recipes like this to clear out any cheese that is left in bags. So it had some Sharp Cheddar and Mozzarella as well.

Put the remaining potatoes on top. If you <3 garlic powder as I do, add it here. White pepper is delish as well. Bake at 350 for 25 minutes. Take out, add more cheese and onions on top. Bake for 5 more minutes. It's going to be like napalm when you take it out of the oven, so let it cool off. Oh. And use a pan BIGGER than this one, it will look a lot prettier: 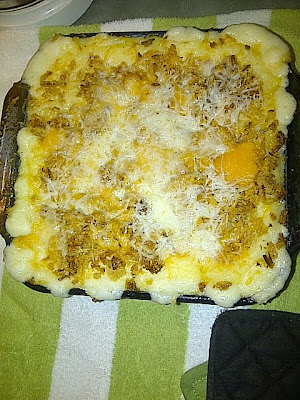 You guys out there are performing a great job.
pork chop recipes,

Lisa
The yard with the flamingos,, Louisiana, United States

Number of cool people who read my blog